Julia Pamilih tells Cuban Life about her trip to Cienfuegos.

Cienfuegos (or literally ‘100 fires’) is a gem tucked away on the south coast of Cuba. Its waterfront setting and Neoclassical colonial buildings make it the perfect respite from the hectic rush of Havana. The city has strong French and Spanish roots, and this influence is particularly clear in the wide pedestrian boulevards full of Cubanos, out shopping and socialising. There are only two main areas to explore – Pueblo Nuevo and Punta Gordo. Just two or three days is easily enough to fall in love with the affable nature of Cienfuegos, appropriately nicknamed the ‘Pearl of the South’.

The focal point of Pueblo Nuevo is Parque Jose Martí, home to the city’s most impressive and imposing buildings. This is also a UNESCO World Heritage Site, and one of the many places across Cuba all named after the communist tripartite of Jose Martí, Che Guevara and Fidel Castro. Probably the most interesting building here is the Teatro Tomás Terry, named after Cienfuegos’ very own business magnate. Inside, you’ll find a large theatre, decorated with hand-carved wood and elaborate frescoes. On the other hand, the musty museums in Cienfuegos are a lacklustre waste of time – instead, wander down Avenida 54, the town’s main shopping street. On a busy day, it’s bustling with local shoppers and a visit to one of these shops is guaranteed to be a unique experience. If you want to avoid waiting 45 minutes in a queue moving at snail’s pace, the offer of a couple of coins has an instant transformative effect on a surly shopkeeper. 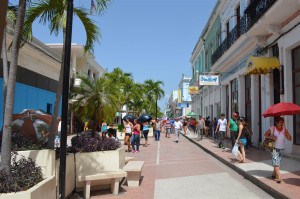 A stroll along the Malecón at dusk, the heart of Punta Gorda, is a must-do whilst in Cienfuegos. A rooftop drink at the Palacio de Valle is a free pass into Cienfuegos’ most eclectic building, built to encompass an extravagant blend of architectural influences and styles. Wander down towards La Punta where there is a small, lively park at the southern tip of the city where cheerful Cuban teenagers head to socialise with their friends at the end of the day. There are also a couple of good restaurants in this area for dinner – El Lagarto and Finca del Mar. Although they are admittedly touristy, the soft fairy lights and gentle bayside setting make them a lovely place to settle down for an evening of good food and wonderful views.

They say the best way to see a city is by foot, and Cienfuegos is no different. Travelling by foot means you can slow down and absorb the wonderful architecture and gentle pace of life. The next best way to travel around is on bicitaxis, available on every corner. Make sure to haggle down the price – it shouldn’t be more than small change. Another fun alternative is the horse-drawn carriages, which run up and down Route 37, connecting Pueblo Nuevo and Punta Gorda, for 1 CUC apiece. 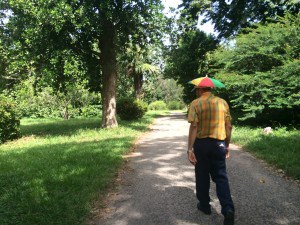 Cienfuegos is also a useful place to stay because of the wide variety of day trips available in the surrounding area. A drive to the Jardín Botánico de Soledad allows you to watch the landscape shift from palm trees to lush vegetation out of a car window. A guide can talk you through the complex variety of plants, and ours had taken the ingenious precaution of a rainbow hat in response to the sweltering heat of summer. He spoke excellent English and took great pride in pointing out and explaining the background of the ancient trees and bamboo amphitheatre. Undoubtedly the most exciting plant is the native Mimosa pudica, which is fascinatingly sensitive to the touch. There are plenty of other day trips on offer – local beaches, a chance to swim next to waterfalls and even a dolphinarium.

Where to stay in Cienfuegos

Cienfuegos has the typical Cuban options of either hotels or ‘casas particulares’. Casas are normally private family homes that have been opened up to tourists, something that the government only began to permit in 1997. The market for casas particulares is now well established, and the government has tightened up regulation to ensure they all have to meet reasonably stringent tourist standards. The major perk is that casas are significantly cheaper than hotels, and rarely cost more than 35 CUC (£25) a night for a double room.

Unfortunately, there are still several less than enticing casas that involve dingy back rooms and lukewarm breakfasts. A better sort of casa, preferably with a sea view and friendly welcome, requires some forward planning. Before you enter Cuba and its Internet black hole, note down some rated casas from TripAdvisor and book ahead, or try recommended names such as Villa Lagarto or Hostal Bahia. At least a rudimentary grasp of Spanish is necessary to survive a casa stay as English is notably rare outside of Havana, but basics and wild gestures will suffice.

There is also a sprinkling of hotels in Cienfuegos, with Hotel Jagua as the largest example of an ugly concrete block, although it serves a useful purpose as the taxi hub of Punta Gorda. The views may be great but it’s a very average hotel that, in a typically Cuban manner, hasn’t yet made the jump into 21st century. Hotel Rancho Luna and Islazul Pasacaballo Hotel are both similarly average. There are more upmarket, boutique hotels like La Unión and Casa Verde but, if you can, it’s nice to look for a casa that can provide a much more intimate insight into Cuban culture.

From Havana to Cienfuegos

Havana and Cienfuegos may have a vastly different ambience but they are only a four hour drive apart. Cuba has a subpar rail network, so it’s wise to make the trip by bus or taxi. Taxis are quite expensive, leaving the excellent Viazul bus network as the best way to travel from Cienfuegos to Havana. A single ticket from between the two is 20 CUC on the Viazul bus, with departures three times a day. This bags you a comfy, air-conditioned seat and even a stop off for a comfort break in a shack on the motorway, which does a roaring trade in stale ham and cheese sandwiches. Bargain. The bus station is just a short taxi ride from the centre of Cienfuegos but a taxi all the way from Havana works out at closer to 120 CUC. Despite the added bonus of flexibility and convenience, seemingly at a comparable price, a taxi is likely to be cramped and more hectic than the bus service. Upgrading to a more spacious minivan would solve the comfort problems, but with a considerable price rise to around 250 CUC.