While Cuba and America have vastly different ideologies, there is at least one major passion they have in common – baseball. 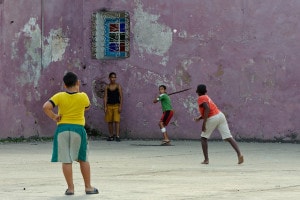 Watching baseball in Cuba is a unique cultural experience. Cubans go crazy for the game – which may be a surprise to those who associate the sport with America. Baseball did come from the USA to Cuba in the 19th century via visiting sailors, but it became really established when Spanish colonial rulers tried to ban baseball to make Cubans watch bullfighting – Spain’s national sport at the time. Baseball came to be seen as a symbol of resistance, which only made the game more popular. The ban also served to strengthen the connection between Cuban and American baseball culture with Cuban Steve Bellán joining a New York baseball team called the Troy Haymakers in 1869. More recently in 1999 the Cuban national team played a series against the Baltimore Orioles, which was the first occasion on which an MLB team played in Cuba since the end of the revolution. Last year (2014) US Commissioner Rob Manfred began discussions to hold a 2016 exhibition game between an MLB team and the Cuban national team.

It is no wonder that baseball has become so popular in Cuba – the game was ideally suited to the impoverished Cuban community as it could be played easily with sticks and a ball. One individual, Nemisio Guillot, is believed to have started the game when he brought his equipment from Alabama to Cuba in 1864. Within four years Nemisio and his brother Ernesto founded the Habana Base Ball Club. However at the outbreak of the Ten Year’s War for Cuba’s independence from Spain, the sport had to keep a low profile. Baseball in Cuba has always been affected by politics – after the Cuban Revolution the game retained an amateur status with players getting a stipend from the government. The country has an extremely proud sporting tradition and baseball is no exception – in 1992 Cuba claimed baseball’s first Olympic Gold Medal.

Today there are marked differences between watching a baseball game in Cuba and America, not least the price. While an Major League Baseball (MLB) ticket can cost anything from $15-$60 dollars depending on which team you support, visiting a Cuban game as a tourist only costs 3 CUC, and it’s even less if you are local. Tourists can get ‘Home Run’ tours which go to and from the game in an air-conditioned coach and include various paraphernalia. It’s a worthwhile experience to sit around thousands of screaming fans – the atmosphere at the Estadio LatinAmericano in the Cerro neighbourhood is legendary. You can find out whether a local game is scheduled near you by visiting the Cuban baseball website, which has all the teams, stats and more. Alternatively ask a local!

The diplomatic thaw between Cuba and the USA could lead to an influx of Cuban players into the MLB, and improve the overall standard of the game in both countries. This is part of a trend towards Cuban baseball growing in strength.