Ernest Hemingway was a literary giant of the 20th century and one of its most recognizable characters. His talent with a typewriter was matched by a wanderlust which saw him involved in many of the defining epochs of his lifetime. They include learning his craft in Paris in the roaring Twenties before becoming a war correspondent during the Spanish Civil War in the Thirties. His passion for adventure constantly put him at the zeitgeist of the age, it is not surprising that he should have been in Cuba during the revolution preceeding his death in 1961.

Hemingway travelled extensively and spent large chunks of his life in Key West, Florida, (1928 – 1939) and Cuba (1939 – 1960), so we thought it would be interesting to compare how those environments affected his work and what influence they had on him. 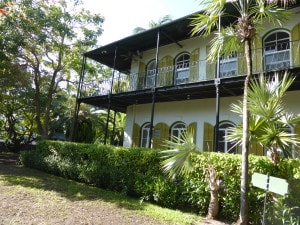 Hemingway House in Key West, Florida, is now a museum

It’s important to note that although Key West and Cuba are geographically very close together, the cultures of these Caribbean locales are vastly different, but they both fulfilled Hemingway’s desires for solitude and big game fishing (indeed the writer John Dos Passos recommended Key West to Hemingway for those very reasons).

It was in Key West that he began his travels to Cuba, basing himself in the hotel Ambos Mundos for a decade before he decided to buy the Finca Vigía, a villa and farm on the outskirts of Havana. Today they are both vital stops on any Hemingway tour of Cuba and room 511 at the Ambos Mundos has been preserved as Hemingway liked it with the original furniture and typewriter.

Hemingway wrote some of his best works in his Key West and Cuba homes and these two charming wooden properties shared architectural similarities and lush gardens. Hemingway left his indelible imprint on both properties, now converted into museums which tourists can visit to find out more about his life. In this article we have detailed some of the similarities and differences between the two properties to get a greater insight into the man himself.

Which books did Hemingway write about Cuba & Key West?

Below you will find a list of novels which Hemingway wrote in the two houses, though this is a broad categorization because he may have in fact written his novels in a number of different locations. A good example of this is For Whom the Bell Tolls, the story of a young American who was attached to a guerilla Republican unit during the Spanish Civil War. Hemingway started the novel in Cuba, but wrote sections of it in Key West and Sun Valley, Idaho.

Looking at the table it’s fair to say that these exotic locales were an inspiring environment, however many of these books are actually based on his memories and experiences in Africa and Europe, and only one novel had scenes which occur in the United States. 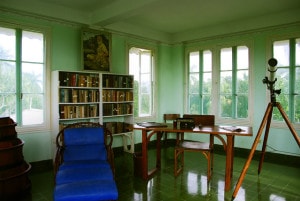 One book stands out from the list though, a Cuba-inspired novella for which Hemingway won the Pulitzer Prize for Fiction in 1953, and the Nobel Prize in Literature the following year. The Old Man and the Sea was Hemingway’s last major work of fiction and is thought to be partly based on Gregorio Fuentes, a seafarer who became Hemingway’s fishing companion and who migrated to Cuba at 22 having been born in Lanzarote. In this respect Cuba was arguably more inspiring for Hemingway, especially considering that his most famous work, For Whom the Bell Tolls, was conceived there as well. Hemingway was at his Cuban villa when he received the Nobel Prize in 1954. He said; “This prize belongs to Cuba since my works were created and conceived in Cuba, with the inhabitants of Cojimar, of which I am a citizen.” Having said these words Hemingway placed the Nobel Prize at the foot of a statue of the Virgen del Cobre. The Virgin was recognised as a saviour of sailors.

Gregorio Fuentes became the first mate of Pilar, Hemingway’s boat which lies in the grounds of the Finca Vigía. Hemingway’s original first mate, Carlos Gutiérrez, was a likelier inspiration for Santiago, the title character in The Old Man and the Sea, as he supposedly taught Hemingway everything he knew about marlin fishing. However when tourists visited the fishing village of Cojimar they heard Fuentes’ stories about Hemingway’s exploits and so naturally Fuentes became associated with Santiago, especially as Fuentes lived to 104 (during which time he never read The Old Man and the Sea)! 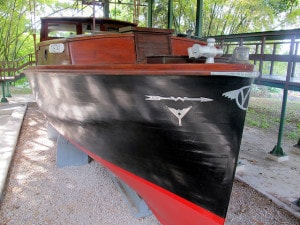 Another quirky story is that the only occasion on which Hemingway and Raul Castro met was in presenting Castro with the Hemingway Trophy for winning a marlin fishing contest. The many connections between Hemingway and nautical life in Cuba are encapsulated by the fact that one of the main marinas in Havana is named after the writer – the Marina Hemingway. Hemingway also sailed Pilar around the Florida Keys and tales of his three favourite past-times –fishing, fighting and drinking – are recorded at the Bimini islands. Hemingway’s great knowledge of the Northern Cays led him to having had Pilar equipped as a Q-ship which could hunt and destroy German U-boats with the blessing of the US ambassador to Cuba. Hemingway’s wife at the time skeptically noted that this was merely a ruse so that he could get rationed petrol for his fishing trips.

It is fair to say that Hemingway had a tempestuous love life, having been married four times. After the break-up of his first marriage to Hadley Richardson, Hemingway left Paris and moved to Key West with Pauline Pfeiffer. It was Pauline’s uncle who bought them the house there, with a balcony which became a writing studio. The safari he and Pauline took in 1933 had a profound effect on his writing style. Problems came when Hemingway agreed to report on the Spanish Civil War and he was joined in Spain by a journalist whom he had met in Key West called Martha Gellhorn.

When Hemingway started staying in the hotel Ambos Mundos in 1939, it was the beginning of a long split from Pauline as his relationship with Martha blossomed. While Martha inspired him to write For Whom the Bell Tolls, he soon became infatuated with another woman, Mary Welsh, who he asked to marry him on their third meeting. The last time Hemingway saw Martha was in March 1945 as he was preparing to return to Cuba. Although Cuba is often considered a romantic country, Hemingway didn’t find that leaving Key West helped to make his relationships work.

Both houses had signature Hemingway furnishings – the trophy heads of animals he had hunted, libraries and drinking cabinets.

They both had swimming pools and a penny is embedded in the Key West swimming pool. This is because Pauline had it built while he was away. On returning and hearing the cost he claimed the pool had accounted for his last penny, which he tossed into the wet concrete where it remained.

While visitors are not allowed into the Finca Vigía, it has arguably not been as well preserved as its Key West counterpart. A guard at the Cuban villa allegedly told the Irish novelist Adrian McKinty that for $200 McKinty could take any book he wanted from the library, while the former Monty Python funnyman Michael Palin claimed that his director was mortified to accidentally smash a vase while they filmed a documentary about Hemingway in Cuba.

A distinctive feature of the Finca Vigía is that you can see the boat Pilar in its grounds, but in many respects the houses were very similar. They showed the tensions within Hemingway who on one hand was happy to stay at home writing and enjoying the comforts of domesticity (such as pets), but who always longed to be at the centre of the action. In that respect he is a precursor of the Gonzo journalists who wanted to be the main protagonists in their stories. The Gonzo journalists experienced a tension between being men of action and men of letters, which impacted on their relationships and personal lives. Hemingway’s need to move from his Key West home to the villa in Cuba was a reflection of this.

And most importantly…the cats

Initially Hemingway only kept peacocks at Key West but he brought a gray Angora cat named Princessa from Key West to Cuba. He picked up two male Cuban kittens named Good Will and Boise, the latter of whom he wrote extensively about. By 1943, the cat population at the Finca numbered 11. When Mary Hemingway moved into the Finca in 1946, she had a writer’s workshop constructed but Hemingway preferred to work in his bedroom and the workshop was assigned to the cats. 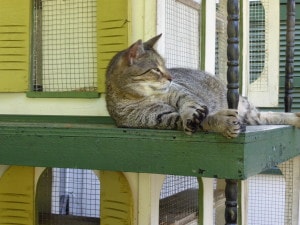 A polydactyl cat at Hemingway House

Descendants of Hemingway’s cats continue to live in Key West, but these ones have a crucial difference. Allegedly Hemingway was given a multi-toed (polydactyl) cat for good luck on the seas, and around 40 of them remain at Hemingway House. Both properties are home to pet cemeteries which show that Hemingway was as fond of nurturing domestic animals as he was of hunting wild ones.