We made the mistake of doing too much walking on our last visit to Havana. Being used to striding purposefully around cultural attractions on European city breaks, we failed to adjust to the Caribbean pace, which is crucial in the midday heat. While there’s a marvellous array of sights and sounds to enjoy in the Cuban capital, I wish we’d used more of their public transport options in our search for the cigar factory, as the stifling heat can crush the best will in the world. 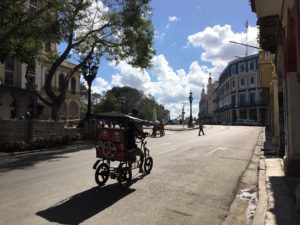 Hail a pedal bike because Havana is huge, and hotter than hell warmed up

We tried to cut down on walking by seeing as much as possible  in each neighborhood – but Cuba is a country whose vagaries thwart all plans. And so, hoping to take in both the Partagas cigar factory and Havana’s most iconic building at the same time, we arrived at the Capitol building dripping with sweat after a less than pleasant walk north through the old town. It’s a visceral country and while the classic cars look fantastic, they are also lacking catalytic converters which means you are constantly being coated in smog. There is also a rather unfortunate smell of piss in many of the streets – though this can’t all be blamed on Havana residents as we saw a tourist relieving himself as well.

After these mildly traumatic experiences we walked up the steps to the Capitol only to have an aggressive female security guard throw us out immediately. We were unaware that the whole place was being revamped and had closed to the public, having only brought a 2010 issue of the guidebook with us (something we came to regret on more than one occasion).

The security guard didn’t spend any time on pleasantries or an explanation, so we sat in the shade for a while trying to unmelt, and then went looking for the nearby tobacco factory. The cigar factories are fascinating as you get to see how the cigars are rolled, and the process is so manual that factory workers get read to each day to keep their minds occupied while their hands work overtime.
At least that’s what I’m told but I don’t actually know for sure as the cigar factory was also closed (damn that outdated guidebook!). We were informed that the cigar factory had moved four blocks away from the Calle Industria to somewhere in Chinatown. I’d like to provide really useful information in this blog by giving you the new address but I’m not sure there’s much point as it will probably have moved again by the time you read this. What I can say is that when you find the location, it’s worth booking a tour ahead of time as they have quite limited time slots available. Luckily we were open to go into the official Partagas shop and buy some Cuban cigars.

You’re only supposed to buy Cuban cigars from the official state factories and anything that you are sold on the streets will be a fake or a scam. Even when you get to the right outlets, the process of buying Cuban cigars is somewhat daunting as there is so much choice. A forlorn tourist asked us for advice as he wanted to buy some for his parents but didn’t have a clue what they liked. We knew enough to tell him the names of the premium brands – Cohiba, Montecristo, Romeo y Julieta – but not much more than that. 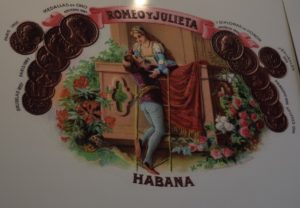 Romeo and Julieta is a romantic brand

We also warned that we had overheard an American girl who got a good deal on buying two large boxes but then realized she couldn’t take all of them back to the states and so was trying to resell them. The shop assistants can explain all the rules to you – basically you don’t have to declare less than 50 cigars in your luggage. On a separate trip we made an interesting visit to the tobacco museum in Havana Vieja where we learned more about the history of cigars, and you can also see the cool lighters which Castro used, many of which were gifts from other countries.

You can get the idea of how cigars are made via this YouTube video.