Castro’s revolution inadvertently created a second Cuban society. When the Communist leader overthrew Batista in 1959, many Cubans fled to Miami.

More joined them over the years of El Commandante’s regime to make Little Havana a prominent representation of Cuba’s exile community, and there was an influx again in 1980 of 100,000 Cubans into Miami during the Mariel Boatlift.

Due to the years of struggle they faced as they set up a new home, Cubans who escaped Cuba are often vocally critical of the regime they left behind. But they also cherish their Cuban identity, making Little Havana a bright and vibrant enclave of Cuban life.

Though geographically close to Cuba, in terms of ideology Little Havana could not be more different to its counterpart in Cuba. This is a melting pot of Latin American culture in which 98% of Miami’s large Hispanic community live.

Today in Little Havana Cuban culture is beautifully preserved, to the extent that the neighborhood was recently added to the National Trust for Historic Preservation’s list of national treasures. In Little Havana there are cigar shops where you can see Cuban cigars being rolled, ventanitos (window shops that serve the small cafecitos) and the Cuban Memorial Boulevard which pays homage to Cuban soldiers who fought in the 1981 Bay of Pigs Invasion and the War of Independence. However the National Trust for Historic Preservation also flagged that Cuban culture in Little Havana is endangered.

This is mainly to do with preserving spoken Spanish in the area – while you can still order from the McDonalds there in Spanish, the number of Spanish radio stations which broadcast to the barrio are declining and there’s a fight to maintain Cuban ways of life amidst America’s very different ideology. 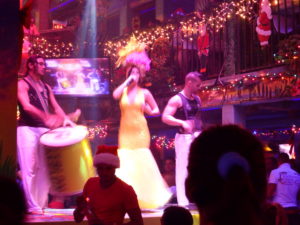 Strolling through the streets of Little Havana you can see the telltale Cuban street art, as well as men playing dominoes and eateries which offer culinary favorites like Cuban sandwiches and Ropa Vieja. As you would expect from an expedition down any Havana street – the Calle Ocho in Miami is alive with the sounds of Cuban music. Viernes Culturales is an social arts and culture fair that takes place on the last Friday of each month in the heart of Calle Ocho by eighth Street South West between 14th and 17th Avenues.

Walking through the plazas and sidewalks you can browse art exhibits or pop into galleries which are participating, sometimes showing films or displaying installations. There’s also a program of educational activities at the historic Tower Theater and free walking tours led by Miami historian Doctor Paul George. If you want to see the intensity for which dominoes is famous, head to Domino Park to watch heated debates take place while the stones are slammed down.

If you want help planning a trip around then it’s best to start at the Little Havana visitor center where they can give you maps and tell you what’s on.