Everything about Cuba is unexpected – it defies all rationality. The country has a monopoly on the misunderstood and that includes strange statues.

While a lot of the art has heavy political connotations – some of it is just downright weird, so much so that we just had to share it.

Exhibit A is this statue of a naked woman holding a fork and riding a rooster. National Arts award winner Roberto Fabelo donated this to the old square of Havana but to say it’s out of place is an understatement. Why is the woman life-sized when the rooster and the fork clearly came from a giant’s farm holding? Why does the rooster only have one leg? So many questions. The work is described as a stunning commentary on poverty but I’m not so sure. 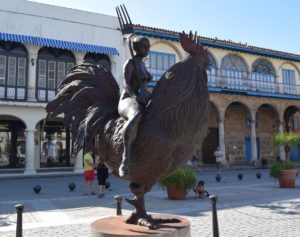 Most disturbing was the series of cherubs positioned throughout the Hotel Ambos Mundos. If you miss the lift you’ll end up walking around the sorts of eerie corridors made famous in The Shining. And then you come across this. 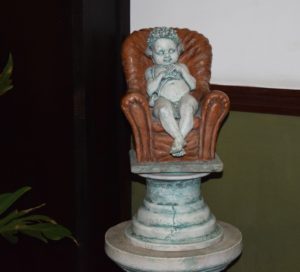 Evil babies are everywhere in the Hotel Ambos Mundos – watch out! 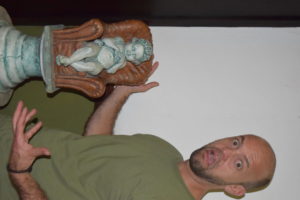 It’s not creepy at all

Trust me, the photos don’t do it justice. It’s way creepier in real life.

Finally, this surrealist Golem was being closely studied by a large German tourist group, which means I have absolutely no idea what they were saying about it. 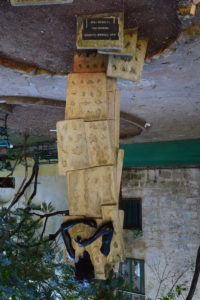 If you’d like to see some more serious statues of Havana here’s a comprehensive list. They include the statue of John Lennon in the Parque Lennon, and the monuments to Jose Marti and Antonio Gades.