In the consumerist vacuum created by the communist state in Cuba, various forms of art such as music, dance and painting have all thrived. Havana is without doubt one of the most photogenic cities in the world, as the sharp light and array of colours at every turn makes the city pulse with vibrancy.

Art is constantly used to convey messages, whether they be communist slogans on billboards or sentiments of unity shared on buildings and walls. Street art in Havana fits perfectly into this ecosystem, and local artists have a variety of intentions; praising and critiquing the regime, observing Cuban life and commenting on the rich culture around them. There is something for everyone here, though much of the serious art is intense and filled with expressions of struggle. 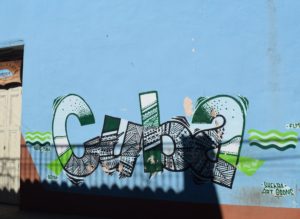 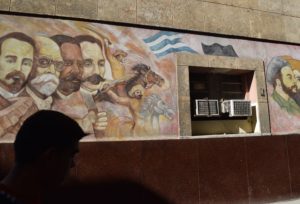 One of the most commonly found forms of street art is the mural and this is used to tell historical stories, celebrate people living and dead and capture important moments in time. Below are a selection of some of the most eye catching murals in central Havana. 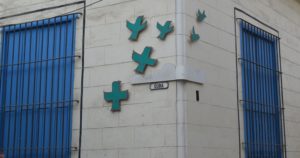 Graffiti is a popular way of subverting the mainstream culture in cuba, as it is anywhere else in the world. The stencil below looks like a Banksy (unverified whether it is or not) and seems to be a commentary on the fact that anyone who disagreed with the Cuban state ethos was branded a dissenter and may have been forced to swim with the sharks as they braved the crossing to Miami (is the female body here a symbol of the allure of capitalism?). Of course the beauty of such artworks is they can be interpreted however the viewer sees fit, but there is definitely an air of menace to this piece of street art. 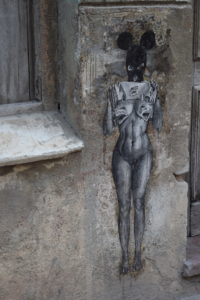 Is this is Banksy or another graffiti artist with a similar style?

In Cuba being a Graffiti artist can land you in jail. Not because it’s an act of vandalism, but because the state messages are carefully protected, as El Sexto found to his cost.

However the art below shows the opposite side of the coin. While the masked man is a protest piece, this celebrates two Cuban heroes. Che Guevara and Hugo Chavez. Guevara was instrumental in the success of the revolution while Chavez helped support Cuban trade before his recent death. In the mural Chavez is described as “Nuestro Mejor Amigo” – “Our Best Friend”, and it can be seen as a piece of communist propaganda, highlighting the alliances forged between Cuba and South America during the Cold War with North America. 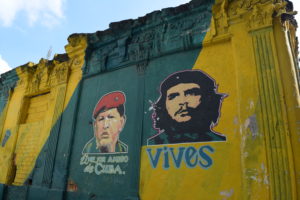 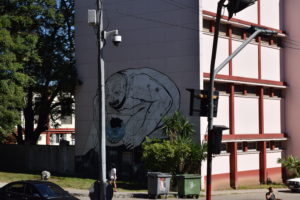 This monster eating the world symbolises the unquenchable capitalist appetite

Cuba is full of art galleries and interesting places to see art both in and outdoors. For instance the Callejon de Hamel is a quirky space used for permanent artworks and installations.

Looking for somewhere to stay in Havana?

If you are going to Cuba specifically to see art then it’s a good idea to time your trip with the bi-annual art festival. The Havana Art Biennial  has welcomed a diversity of artists to exhibit their work in the capital. It was established in 1984 and its first edition was dedicated to Latin American and Caribbean artists, but now the scope has expanded to include artists from all over the world. 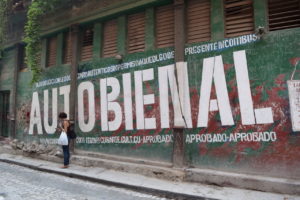 For art-loving Americans who need to visit Cuba via a cultural tour this can provide an ideal opportunity, and you can check out this package on the Authentic Cuba Tours website for more information. However no matter what time of year you choose to visit Cuba, you will find artistic expression and inspiration everywhere you look.